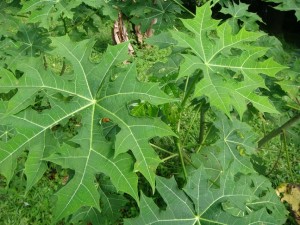 Chicasquil (Cnidoscolus aconitifolius), in other countries also known as chaya or tree spinach, is a large, fast-growing leafy perennial shrub that is believed to have originated in the Yucatan Peninsula. It is associated since pre-Columbian times to the Maya culture. Its succulent stems exude a milky sap when cut. It can grow to be 6 meters tall, but is usually pruned to about 2 meters high for easier leaf harvest. It is a popular leaf in Mexican and Central American cuisines, similar to spinach.
This plant is found from northern Mexico to Guatemala, reaching South to Costa Rica and even Peru. It is easy to grow because it needs no special care, and is found in almost every garden of traditional Costarrican families, usually planted as a natural fence between houses.
Chicasquil is valued for its high iron content, higher than spinach even. It is also a good source of protein, vitamin A, calcium and antioxidants. It has even been found that chicasquil leaves have a possible antidiabetic effect.
The leaves should be boiled before being eaten, as the raw leaves contain a high content of toxic hydrocyanic acid. One minute in boiling water destroys the acid in the leaves. Cooking is essential prior to consumption, to inactivate the toxic components. This is the same case as cassava or yuca, which also contains toxic hydrocyanic glycosides and must be cooked before being eaten.
Cooking for 20 minutes or more will render the leaves soft, and of course safe to eat. You can have them plain with oil or butter, similar to spinach preparations, or integrate them in more elaborate dishes. The stock or liquid the leaves are cooked in can also safely be consumed, but be careful not to use aluminum cookware, because this can result in a toxic broth.
In Costa Rica, chicasquil is traditionally used in “picadillos” (chop up), stews, tamales, enyucados and other dishes. Its name comes from two words in nahuatl: tzicatl, which means ant, and quilitl, which means young greens. This is due to the fact that we preferably use the youngest and most tender leaves of the plant.
Although it has many preparations in Costa Rica, one of the most common chicasquil dishes is from the Central Valley, called “picadillo de chicasquil”, which is the recipe we are presenting today. It is also known as Saint Michael’s picadillo, because old ladies used to prepare it to celebrate Archangel Saint Michael. It is also prepared for important social events, such as weddings, christenings, wakes, and in honor of different catholic saints.
This recipe is ideal to serve as “gallos” on top of a fresh corn tortilla, or with white rice. You can make it with meat or vegetarian. 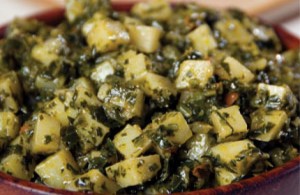 PREPARATION
1. Remove the stems from the leaves.
2. Cook the leaves in boiling water for 10 minutes.
3. Chill the leaves in cold water, drain and finely chop them.
4. Prepare a “sofrito” with oil, onion, bell peppers, celery and garlic.
5. Add the meat to the sofrito and cook in moderate heat.
6. Add the potatoes, salt, achiote, pepper and water.
7. Cover and cook the picadillo over medium heat until the potatoes are done.
8. Add the chicasquil leaves and mix.
9. Adjust salt and pepper to taste.

Want to join the discussion?
Feel free to contribute!